My Mom is an avid Korean drama fan. In fact, my whole family was so into Jewel In The Palace, by a certain time our butt will be glued on the sofa, and our eyes the TV screen. Recently, she has abandoned TVB and spend most of her TV time on new Korean dramas! 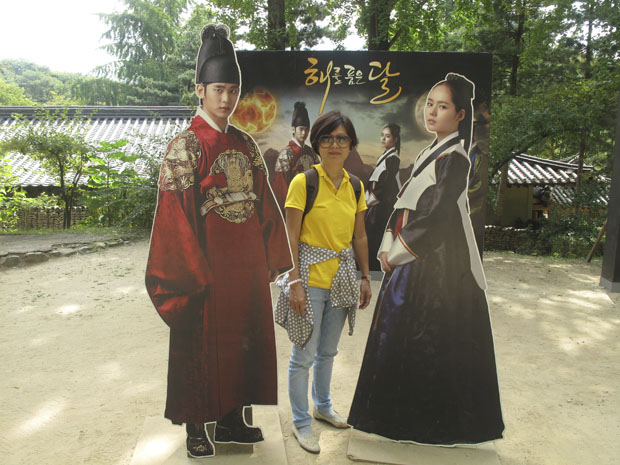 So I thought I must show her around Seoul (What a filial daugther eh? heh heh) So I planned a trip surrounding things that she’ll like. Here’s what we did!

1. Eat Samgyetang at Tosokchon
She loves Korean food. Naturally, I had to bring her to the most famous place for samgyetang (ginseng chicken with glutinous rice). She found huge chestnuts among other things in it and decided she’ll make them at home. So I took her to the market to buy chestnut and ginseng. She’s so happy! 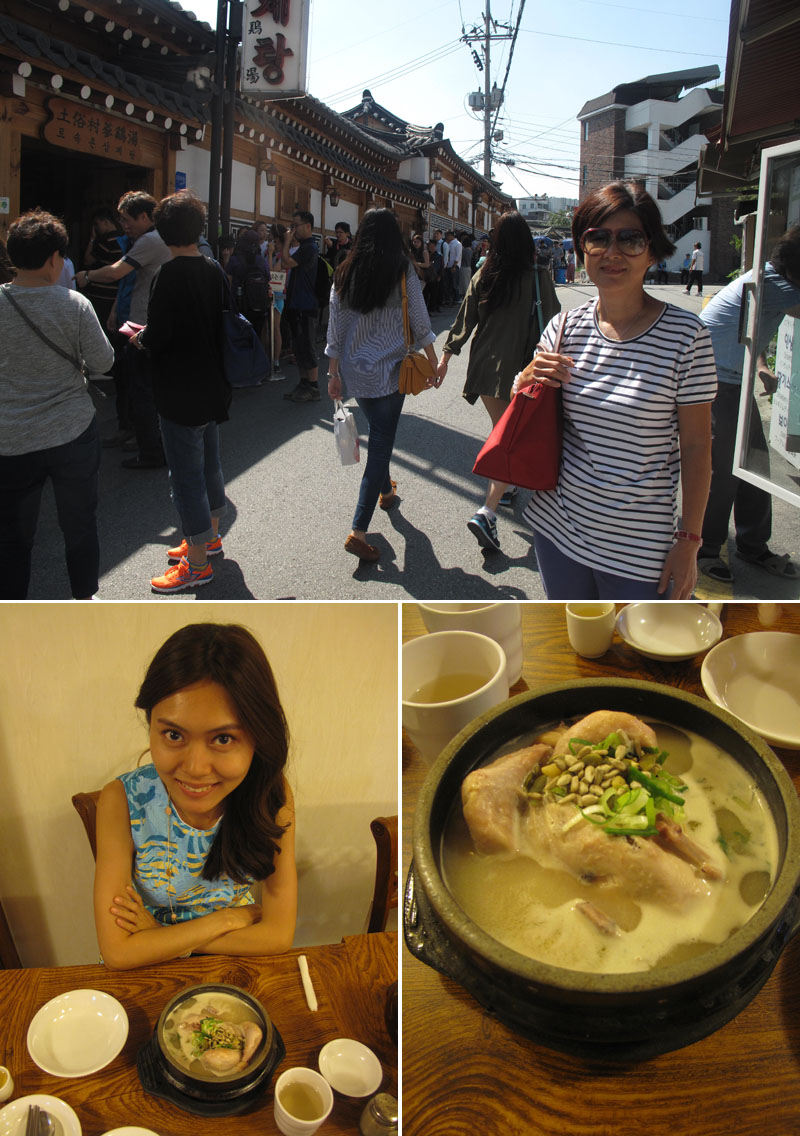 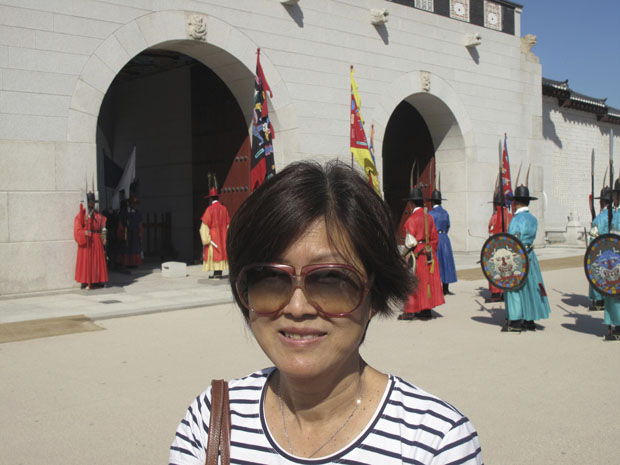 Compared to Forbidden City or Summer Palace, this palace has much less scandal. In China, a concubine upon looking into the mirror, refused to use it again because she doesn’t like what she sees. Maybe Korean tour guides are not as dramatic?

3. Eat Korean Fried Chicken for supper
This is something I knew fairly recently from the boy who go to Seoul every month for work. It seems Korean love to have their fried chicken and beer. I think it’s like how we like roti canai and teh tarik. 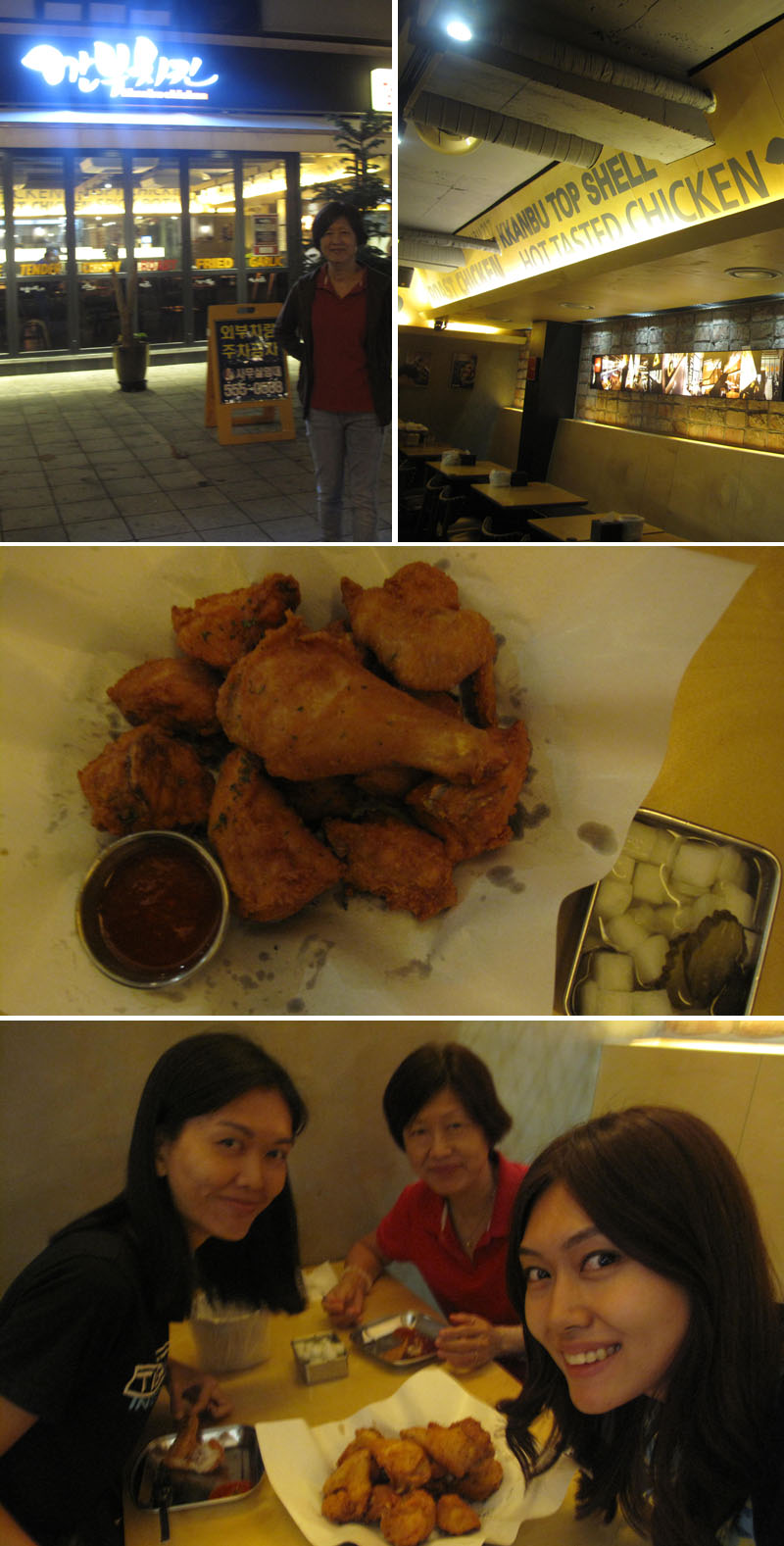 3. Wear hanbok Sejong statue
There’s a place where you can try on hanbok for free. The Korean government is working very hard to export their culture. Visitors can try on hanbok and take a photo at their booth. The backdrop is a painting of three mountains, a sun and a moon. It’s always displayed behind a king’s throne. 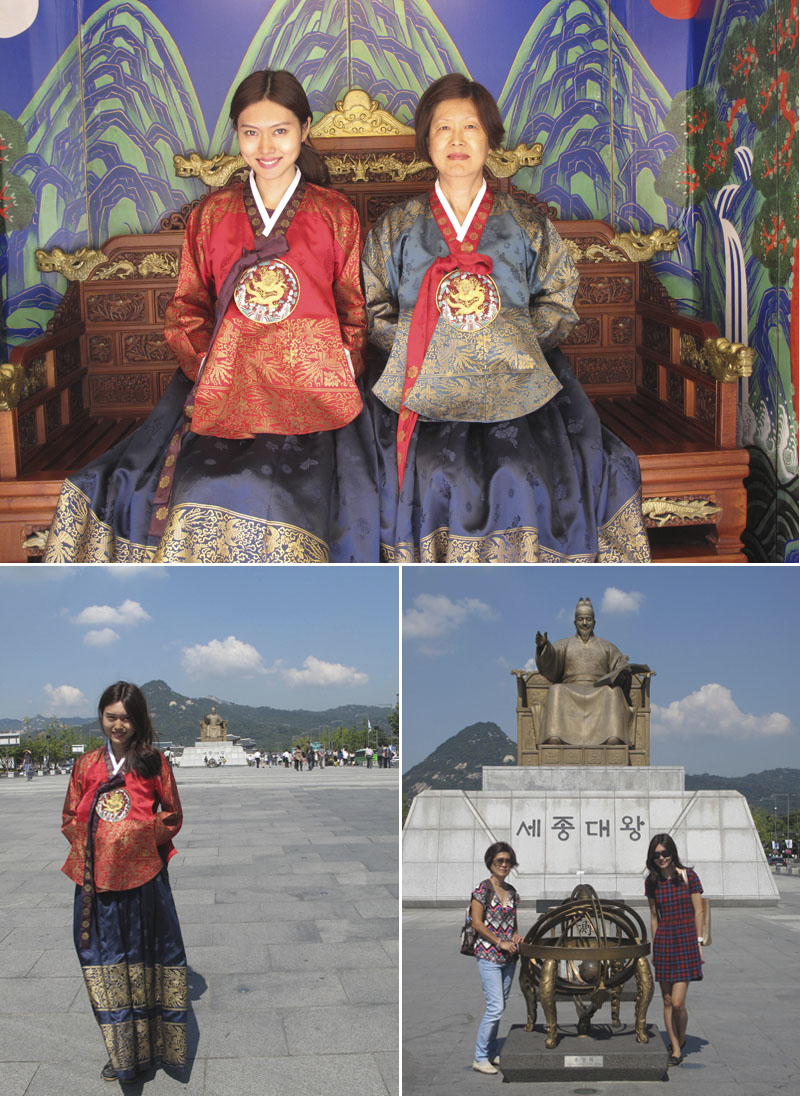 Oh, and King Sejong is the inventor of Korean alphabet. Before, Koreans were using Chinese writing. As it’s very complicated, only officials and the rich were able to learn it. He wanted all his subjects – rich or poor – to be able to write and read. So he simplified the Chinese language and created Hangul. Despite opposition from his father and officials, he worked at night secretly. I am so in awed!

4. Korean BBQ
I am crazy about galbi (grilled beef), especially idong galbi. The Boyfan, after work, took us to one of the best Korean BBQ in Gangnam. You can’t see it, but my Mom was very excited trying out all these food!

5. Dongdaemun and Namdaemun
She’s not into shopping for clothes, so we just walk pass Dongdaemun and had a quick lunch at Lotteria, a local fast-food chain. However, when we are at Namdaemun, she went crazy over sotong, chesnut, kimchi and souvenirs for her friends (?!) 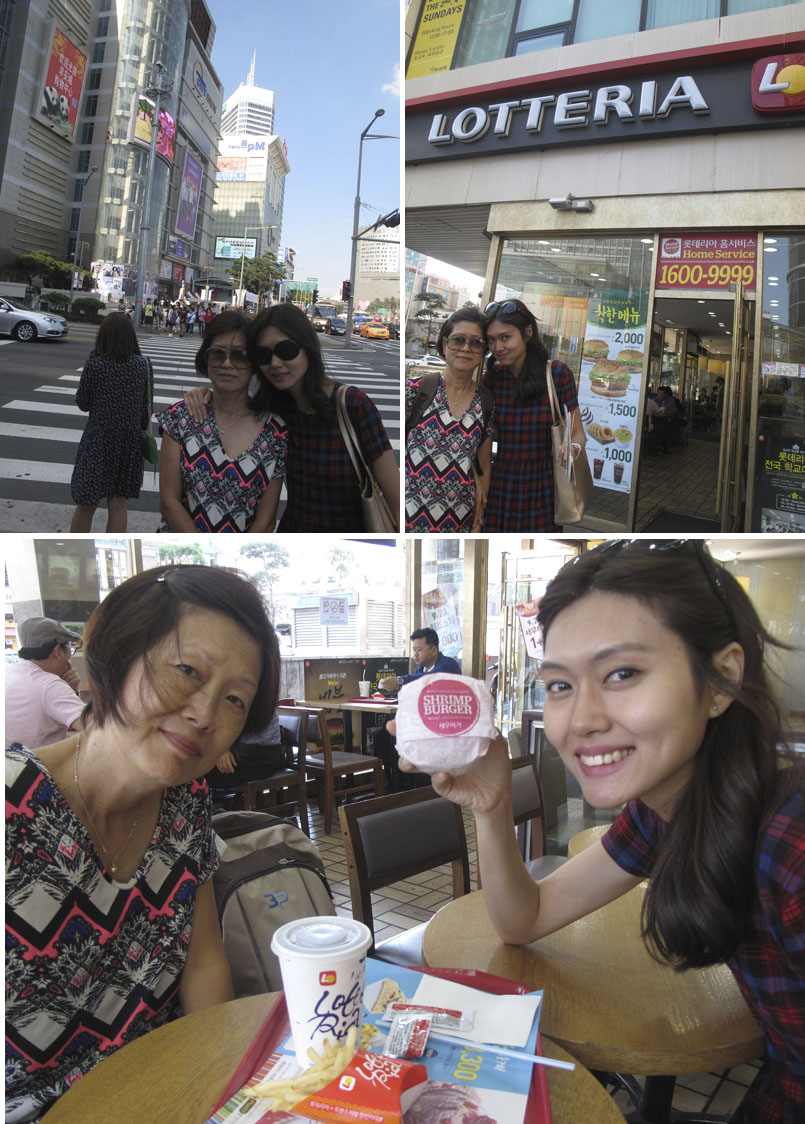 6. Myeongdong
After a while, I’ve learned ‘To make mama happy, give her food’. We were checking out food stalls selling things like ‘fu chuk’ and cosmetics stores. 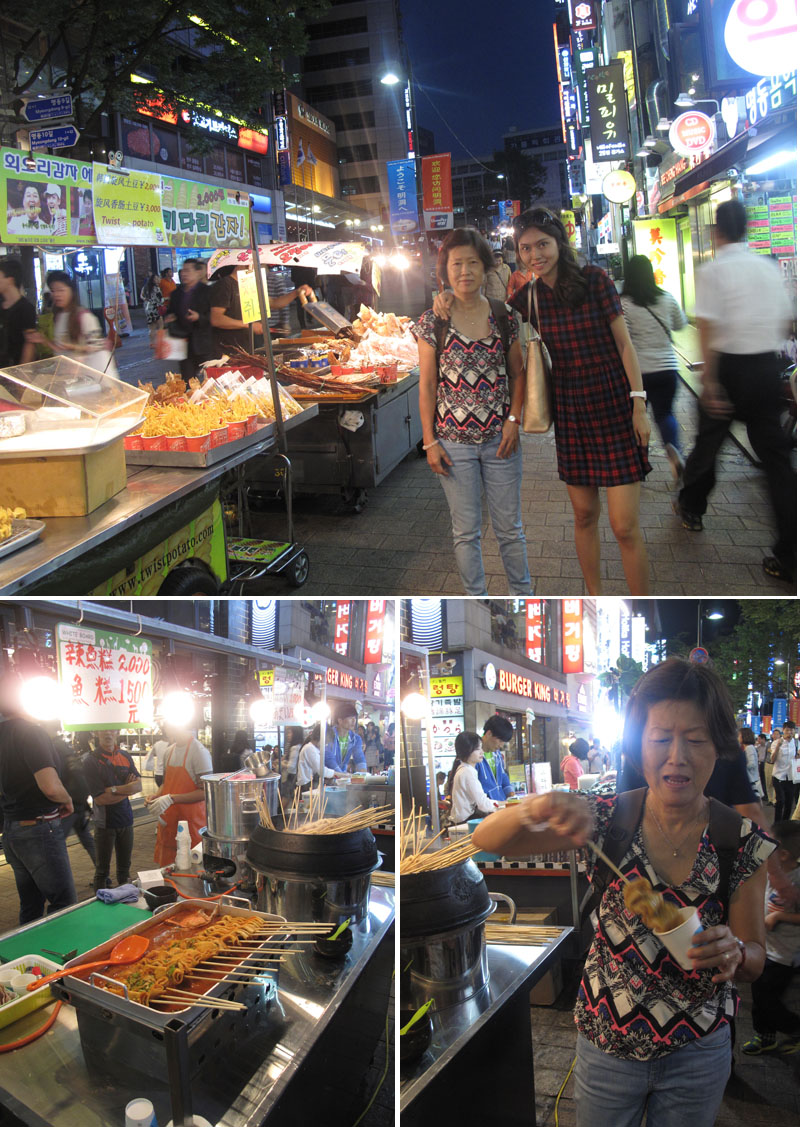 7. Buy something from the convenience store and go for a picnic!
We had fun ransacking GS25. The next day, before going to Korean Folks Village, we bought some drinks, snacks and gimbap (Check out my recipe).

8. Jeju Black Pork
Another famous restaurant in Gangnam. Do come at 6 pm, otherwise you will have to queue for it. A few years ago, I saw people standing outside in the harsh cold weather to wait for this. The pork is so crackly. And there’s this special anchovies sauce that taste incredibly good!

9. Visit Boguensa Temple
We came here on the last day as we only have a few hours before take-off and it’s near to our hotel. When I was there in autumn, the trees were red. I’ve wanted to take my Mom to experience autumn in Seoul. Unfortunately, autumn came late this year 🙁 It’s okay, hope there’s a next time! 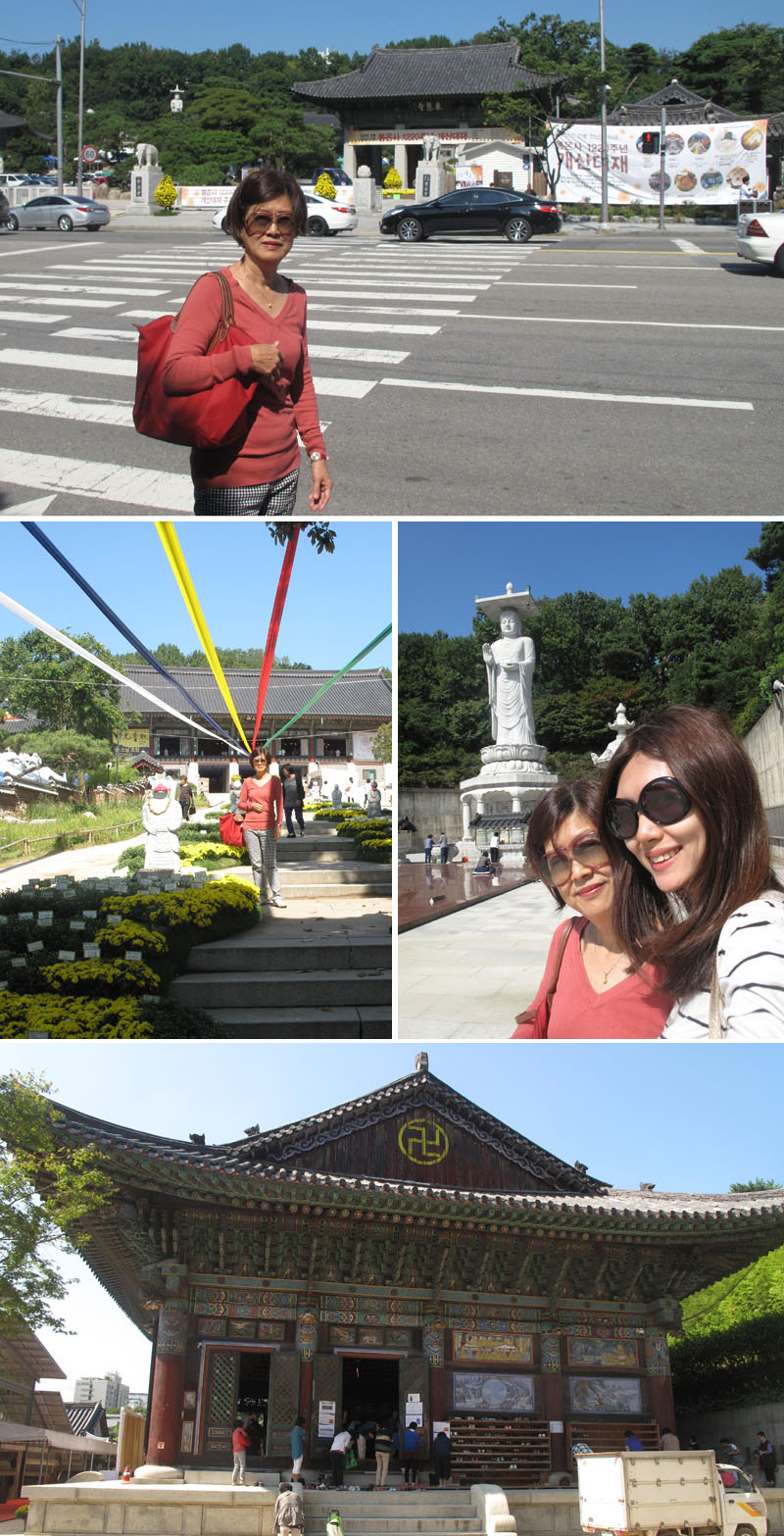 10. Korean Folks Village
I think she had most fun here. We saw a wedding, equestrian show, acrobatics, help Korean kids pass through a long, narrow and dangerous stone bridge, etc. 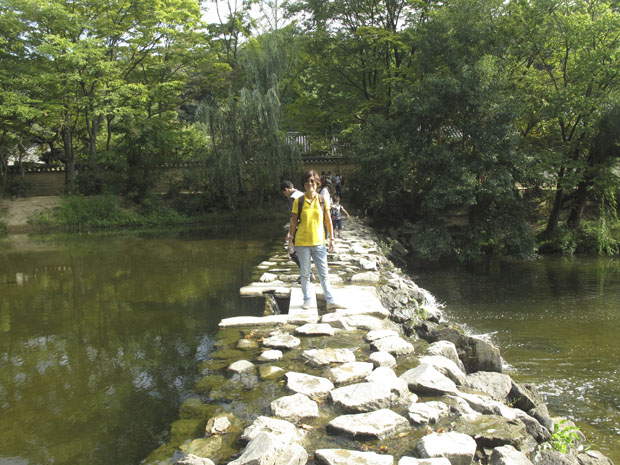 There was a kid who was sticking to my Mom during one of the show. Mom gave her some sweet and offered her a cute plaster on her bruised knee. It’s amazing how the most uneventful thing makes her happy!

I must tell you that I’m a fan Heo Yeon-Woo’s (played by Kim Yoo-Jung) character in The Moon Embracing The Sun drama. When a king asked how much is he worth. She said a cent. Why? A cent is nothing to the rich but means a lot to the poor. A good king is much more important to the poor than the rich. Implying that he must govern fairly. There’s no better answer to that question!

We did a lot more things than this. Maybe I’ll post some photos and caption in the future. It’s so hard to blog for leisure nowadays (having to write at JewelPie and for other paid work). But I’m determine to record all my travels and happy moments! 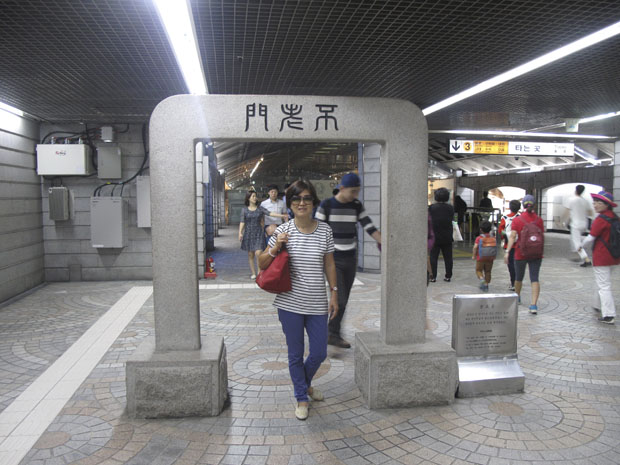 Oh, at the subway I saw the gate of longevity and made my Mom walk through that. Here wishing for many more years of happiness and holidays with my Mommy!