I’ve written the below in Madrid but didn’t post as it was without photos. Sifting through thousands of photo is such a chore…

I’ve forgotten some of the places already including a monument at a roundabout. I think it was an important sight. Was it? Next I shall aim to write about my adventures when I am away, not when. Here’s another ‘10 things I did In [insert city]’ series!

I’ll start with a photo of tapas and sangria (which I had at almost every meal) and Madrid’s coat of arms (a cute bear and a strawberry tree!) 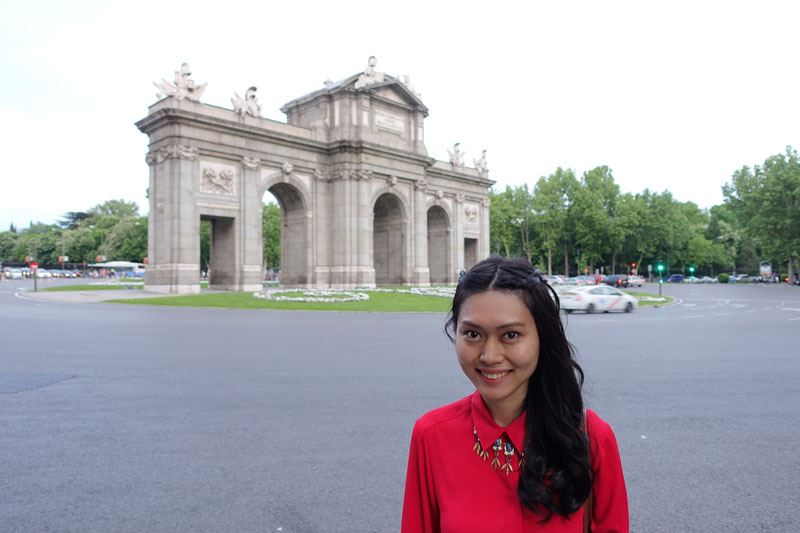 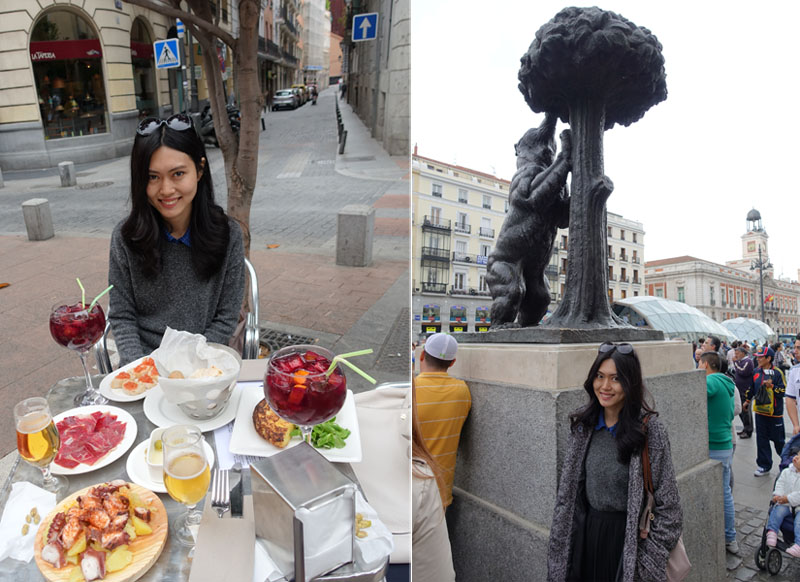 1. Tried Jamon at Museo del Jamon
When planning for my trip in Spain, I draw up a to-eat list before a to-see list. Also, thanks to The Art Of Fermentation, I’ve been dying to try fermented meat like chorizo. So I was super excited when I saw my first of the many Musel Del Jamon in Madrid. It’s a shop and restaurant, selling and serving ham. Vegetarian might not be please to see cured hind legs hanging all over the shop.

We ordered mixed meat with local cheese, bread and a pitcher of sangria. The jamon (ham in Spanish) were freshly sliced and the manchego cheese has a depth of flavour. Though the sangria was very light as compared to Botin (#2) and Coral Del Moreria (#3). The pricing, we thought, was rather fair.

Notes: This chain shop-cum-restaurant is found everywhere. It’s normally packed and you would have to stand to eat. The best place to have this is at Plaza Mayor, where you can get a seat, be table served and enjoy lovely scenery. More At Trip Advisor 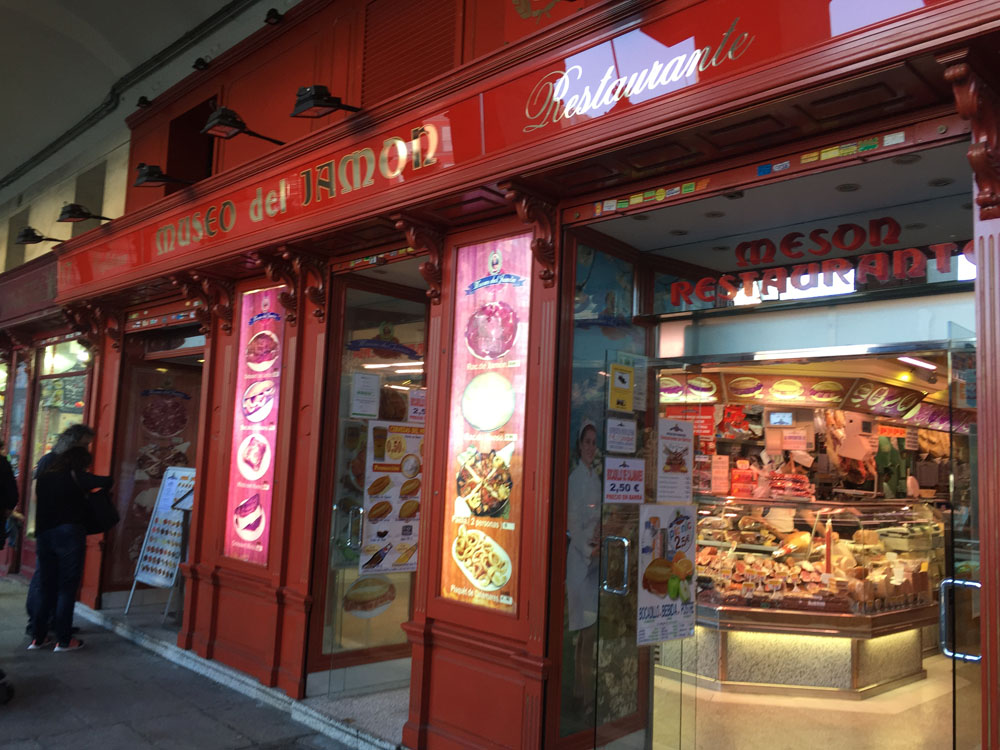 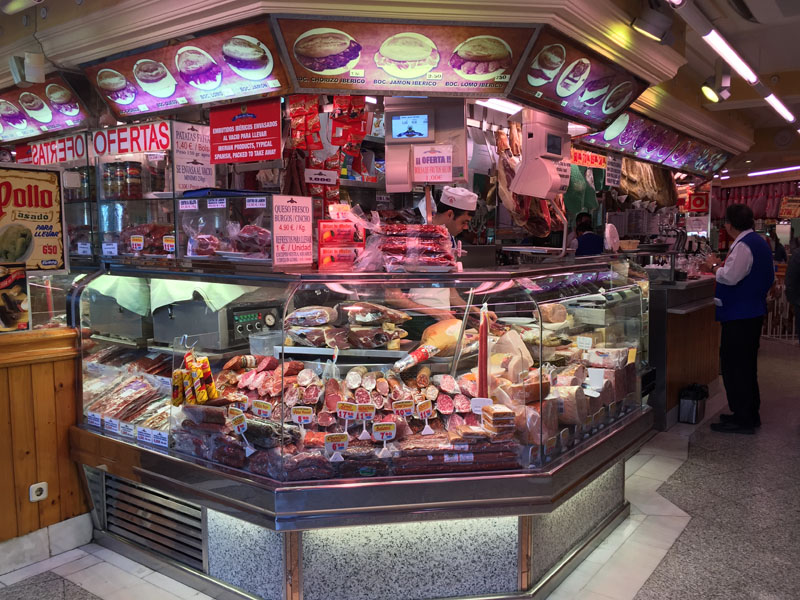 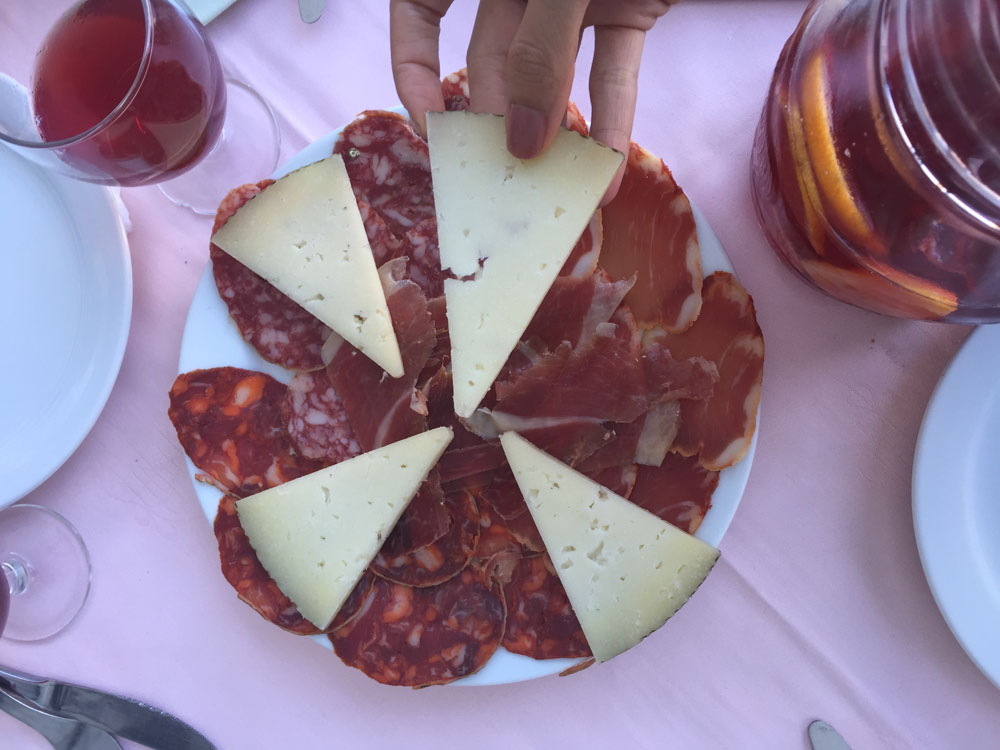 Notes:
I don’t think they do walk-in. Even if they do, chances of getting a seat is slim. Do make booking ahead of time. Sharing platter is not allowed. Be prepared to spend about 30 – 40 Euro per person. More at Botin’s website 3. Watch Flamenco dance
One of the first to-do in our list is to watch Flamenco dance. It has recently been accepted by UNESCO as an intangible cultural heritage. We made a booking for dinner and dance at Coral De la Moreria, the most famous flamenco establishment in Spain which is also listed in 1000 Places To Go Before You Die.

I’ve watched a few cultural dances and I must say this is the most enjoyable of all. The music and beat is made through hand and shoe tapping, finger snapping, clapping and guitar. It’s possibly the most energy-sapping and painful dance in the world. The men even seem to smack themselves (haha!). It’s the first time where I enjoyed looking at male dancers more than female ones. Go watch a Youtube video and you’ll understand!

Notes:
You need to make advance booking to secure a seat. To ensure you get a good seat, you must dine there though that is still no guarantee. The best way is to ask a reputable concierge to make a booking for you. Though you will be told that photography and video recording is not allowed, many people still go ahead. If you really want to record – make sure your flash is off and that you wouldn’t obstruct other people’s view. http://www.corraldelamoreria.com/ 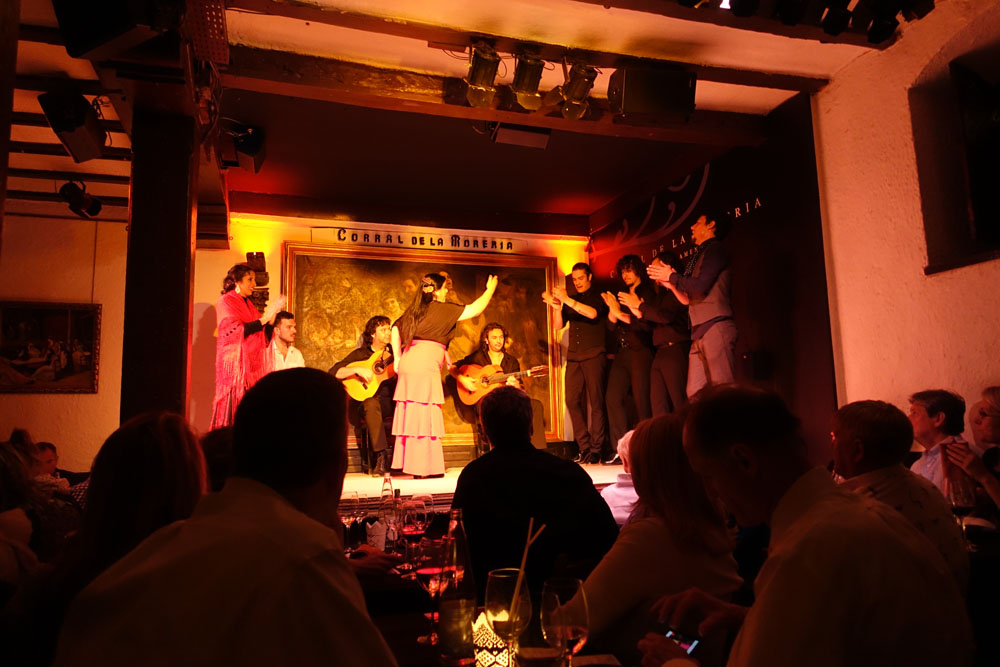 4. Had one of the biggest regrets of my life
Read more here about how terrible I felt after watching a bull being killed in front of my eyes and knowing that I paid for it to happen 🙁 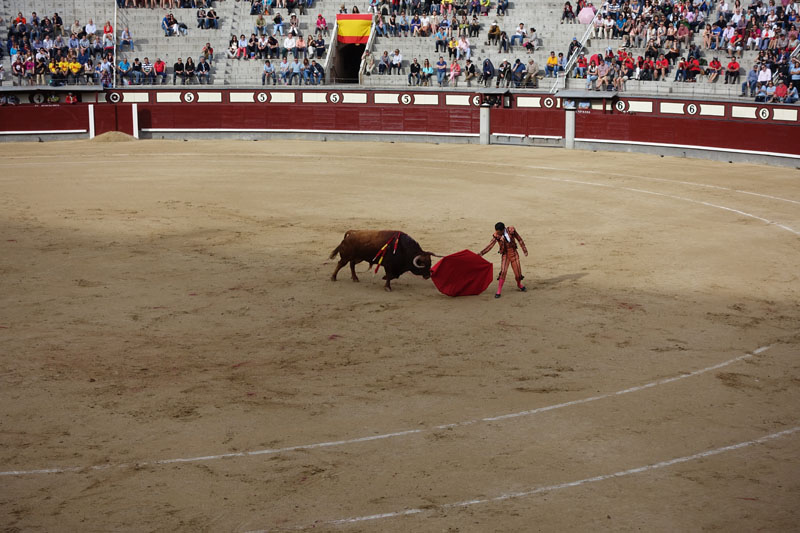 5. Eat churros
Spanish yau char kuay dipped in chocolate! (haha). I like how the chocolate dip is not sweet. It’s dark chocolate. Yum! 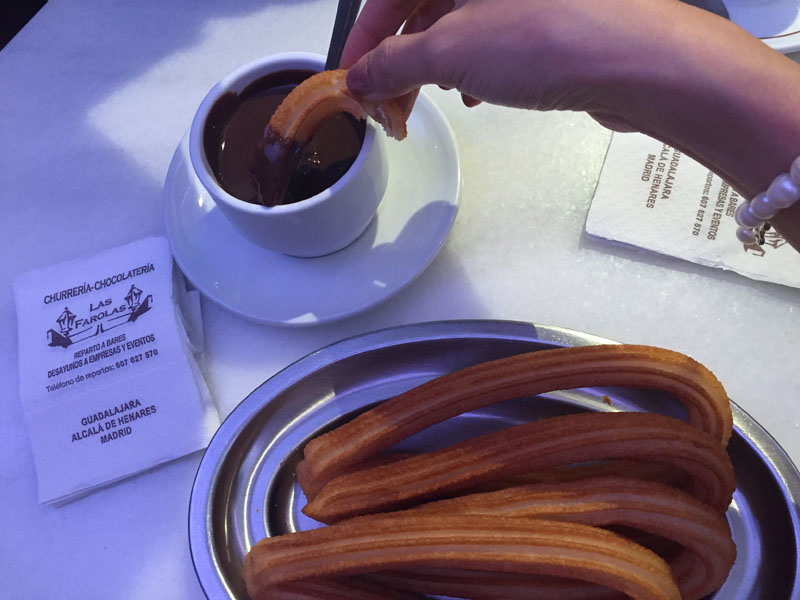 6. See Plaza Mayor and the main square
Plaza Mayor is beautiful . But the square wasn’t impressive (not in photos). This is where you can see the coats of arms. But it’s just a regular square found in every European city…. 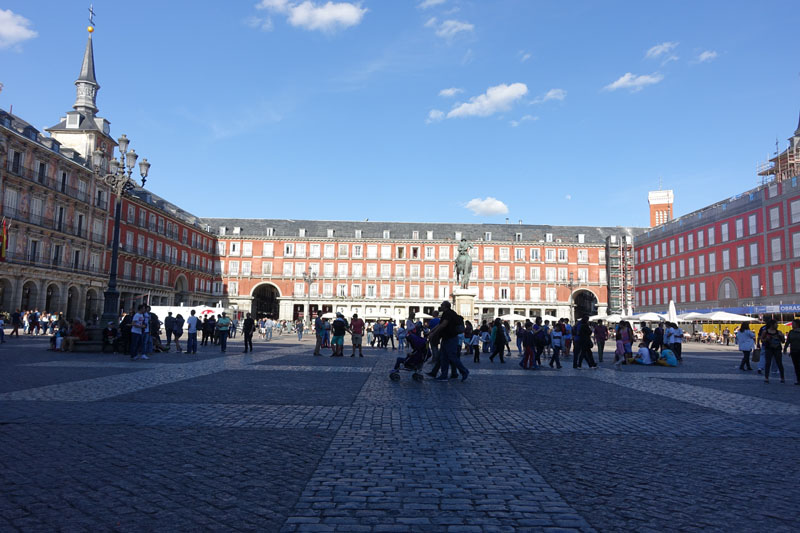 7. Visit Almudena cathedral next to the Royal Palace of Madird
As I’ve seen older cathedral, this didn’t caught my fancy. It’s a rather new cathedral too hence the history is not as rich. I would give it a pass. We walked around to admire the building and park. 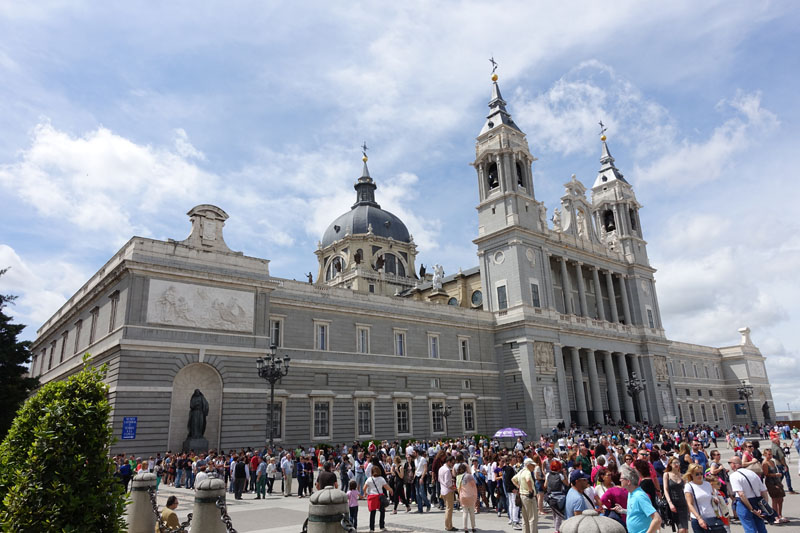 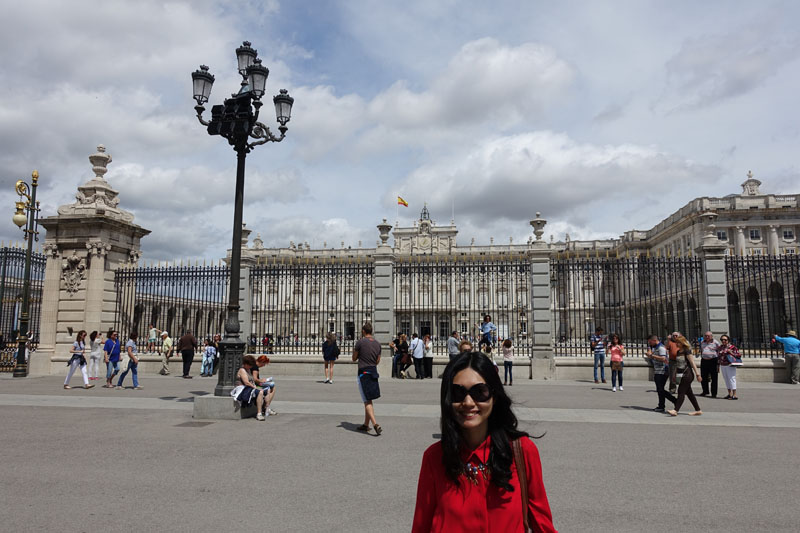 8. Monument of Miguel Del Cervantes and Congress of Deputies of Spain
Didn’t know the existence of this guy until I saw a memorable quote on Botin’s window. When I googled him, I fell in love with the truth and wisdom in his thoughts, especially this one: “There may be love without jealousy, but there is none without fear”. His monument is situated right outside the heavily guarded Congreso de los Desputados (Congress of Deputies of Spain). 9. Enjoyed Francisco Goya’s black painting at Museo del Prado
No photos are allowed in the museum. Here’s where I saw some Picasso painting. But I most enjoy Goya’s black painting (despite not a fan of sad and dark art). Saturn devouring his son (a photo I got from the net) is my favourite. He was almost losing his mind when he drew a dozen paintings on the wall of his house, which was then transferred to canvas. 10. Popped into the church of scientology
As I was walking back to the hotel, I saw the church of Scientology, the religion (?) made famous by Tom Cruise. So I popped in out of curiosity. I even got a little leaflet which reads more like a self-help book than a religious text. (Note: This is not and never will be my faith) I don’t think I can do ’10 Things I Did In Barcelona’ which is such as shame. Sagrada Familia was beautiful, Gaudi was interesting and the beach was still bright at 8 pm.

So how was Spain? If I were to make a comparison: Madrid felt like Penang, Barcelona like KL and Valencia like Kuantan. I liked them all.

Other things one can do