I didn’t know that a tiny country smacked in the middle of Europe have so much history! After visiting a large part of Europe, I think Vienna is a must-go for those who love culture, history and food. My top picks would probably be London, Paris, Rome, Berlin and Vienna. Here’s what I did! 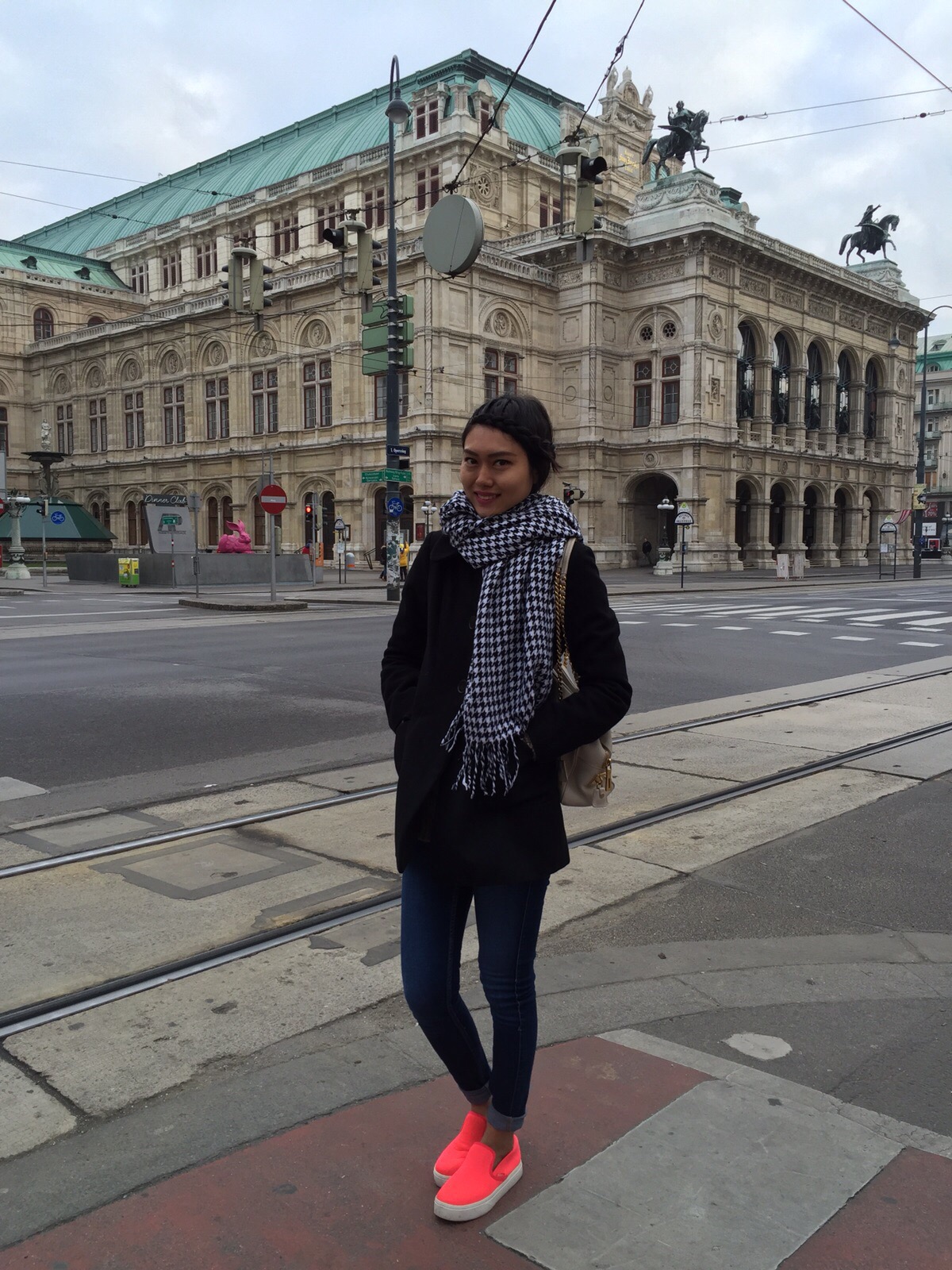 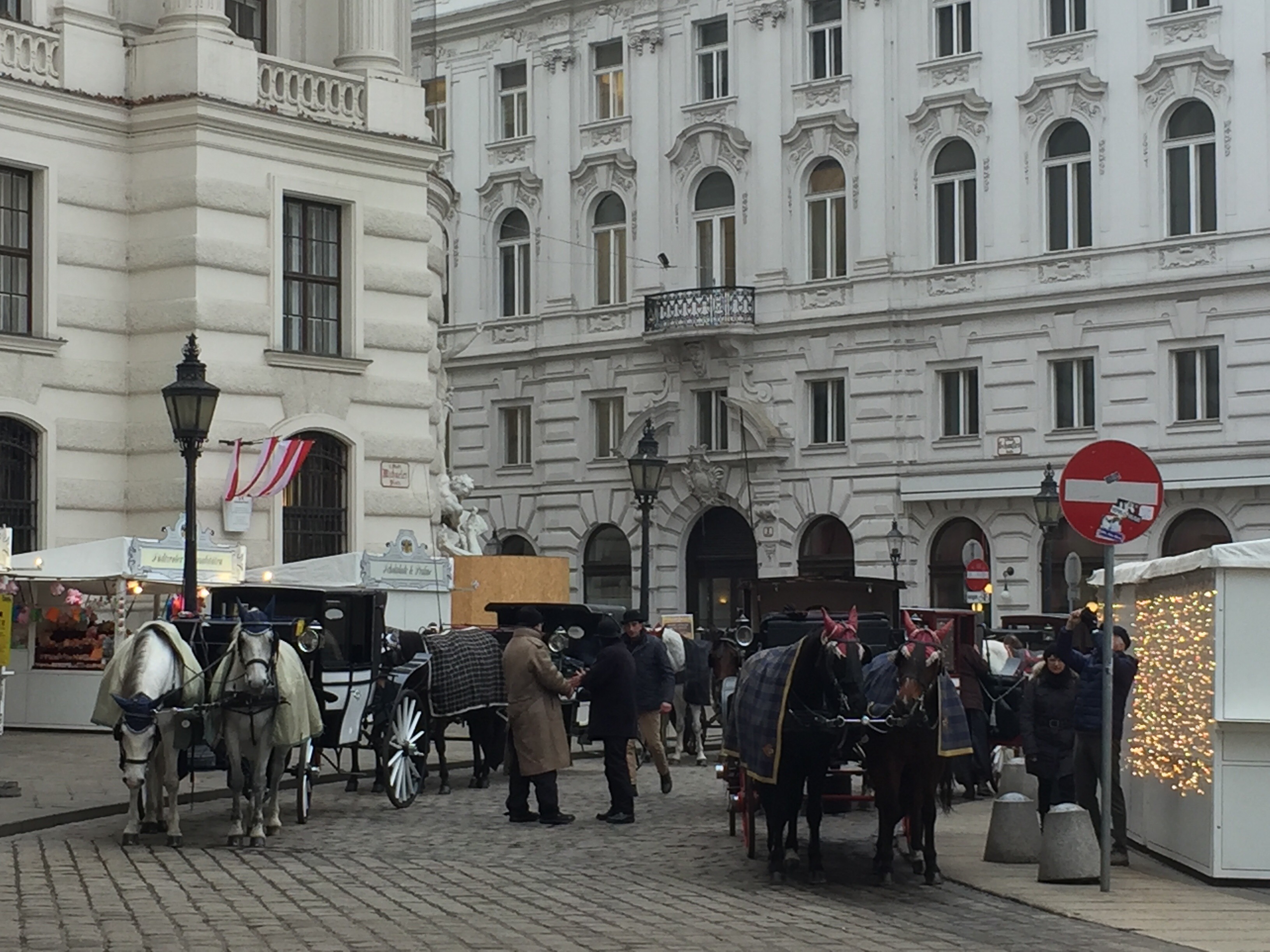 1. Have apple strudels at Cafe Central
Cafe Central, a nearly 140 years of history, was a meeting place of intellectuals and dictators like Adolf Hitler and Vladamir Lenin. I imagined it is very possible that discussions at the very table where I ate my strudel affected the course of history!

Talking about apple strudels, do order one with vanilla sauce. And if you can, get a seat near the portraits of the Emperor and Empress – I think that’s the best view! I spend too little time there. If I were to come here again, I’ll love to read Mein Kampf or newspapers the cafe offers, and soak in the atmosphere. 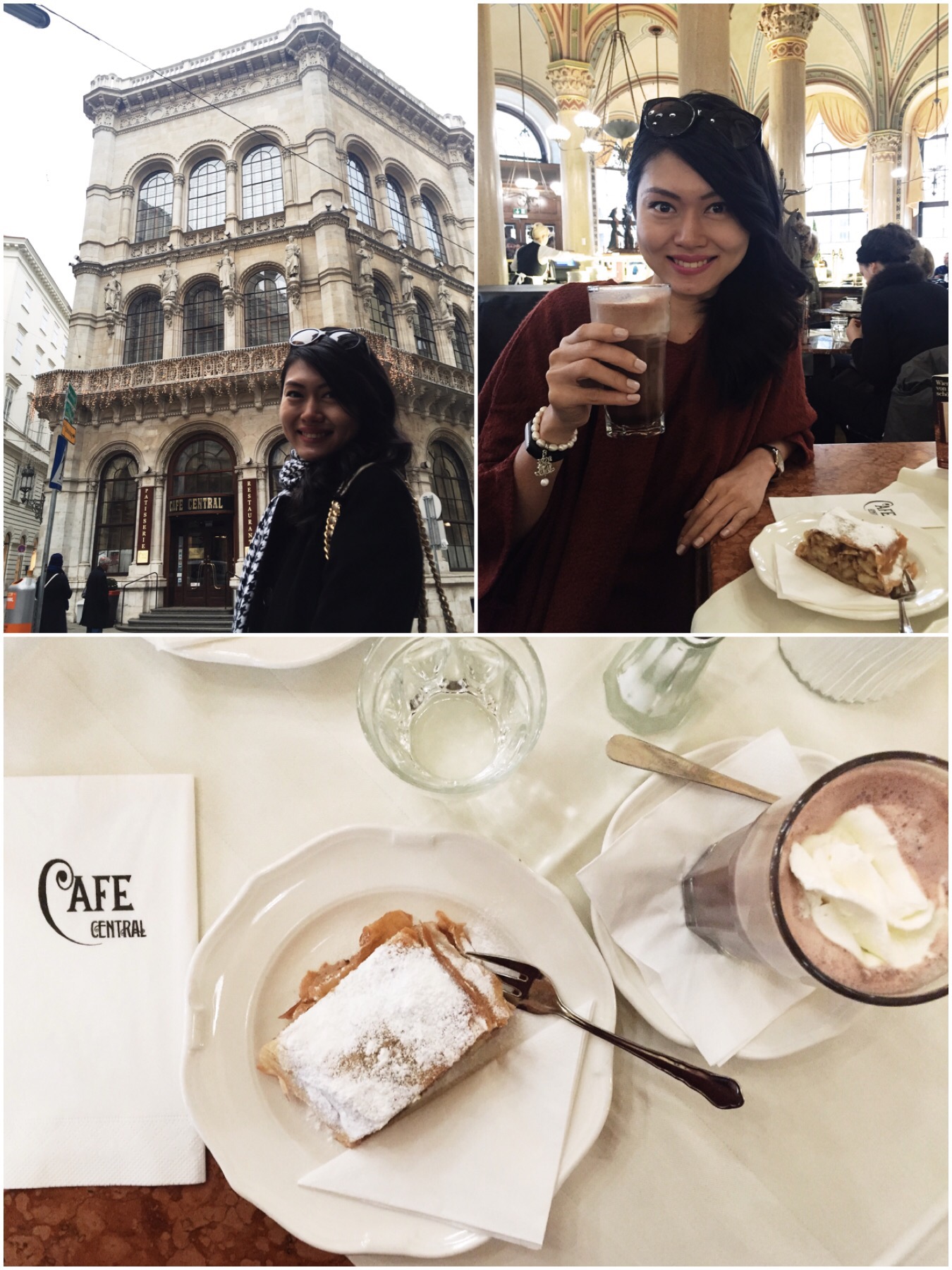 2. Visit Hofburg Palace & Sissi Museum
I was very enthralled by the life of sad Empress Sissi. While I don’t admire her mindless quest to retain her beauty, her attachment to the past and lack appreciation for her family especially the loyal and hardworking Emperor Franz Joseph;  I like her bold ideas, independent spirit and determination.

I particularly enjoyed her gym room where there are bars and railings installed. After her vigorous exercise, she’ll get a massage! The results? A 20 inches waist! I’m also amazed at her ankle length hair which took a few hours to maintain and styled. How she keeps her hair lustrous? Egg and cognac! I can’t imagine the length and the amount until I visited the other palace where they displayed a wig on a mannequin. Didn’t know it’s humanly possible to have that much hair!

An interesting part of the museum (to me) displayed a huge collection of pots and pans, cutlery, porcelain, dinnerwares, centre pieces, napkins and fancy kitchen appliances. It was so aesthetically pleasing! 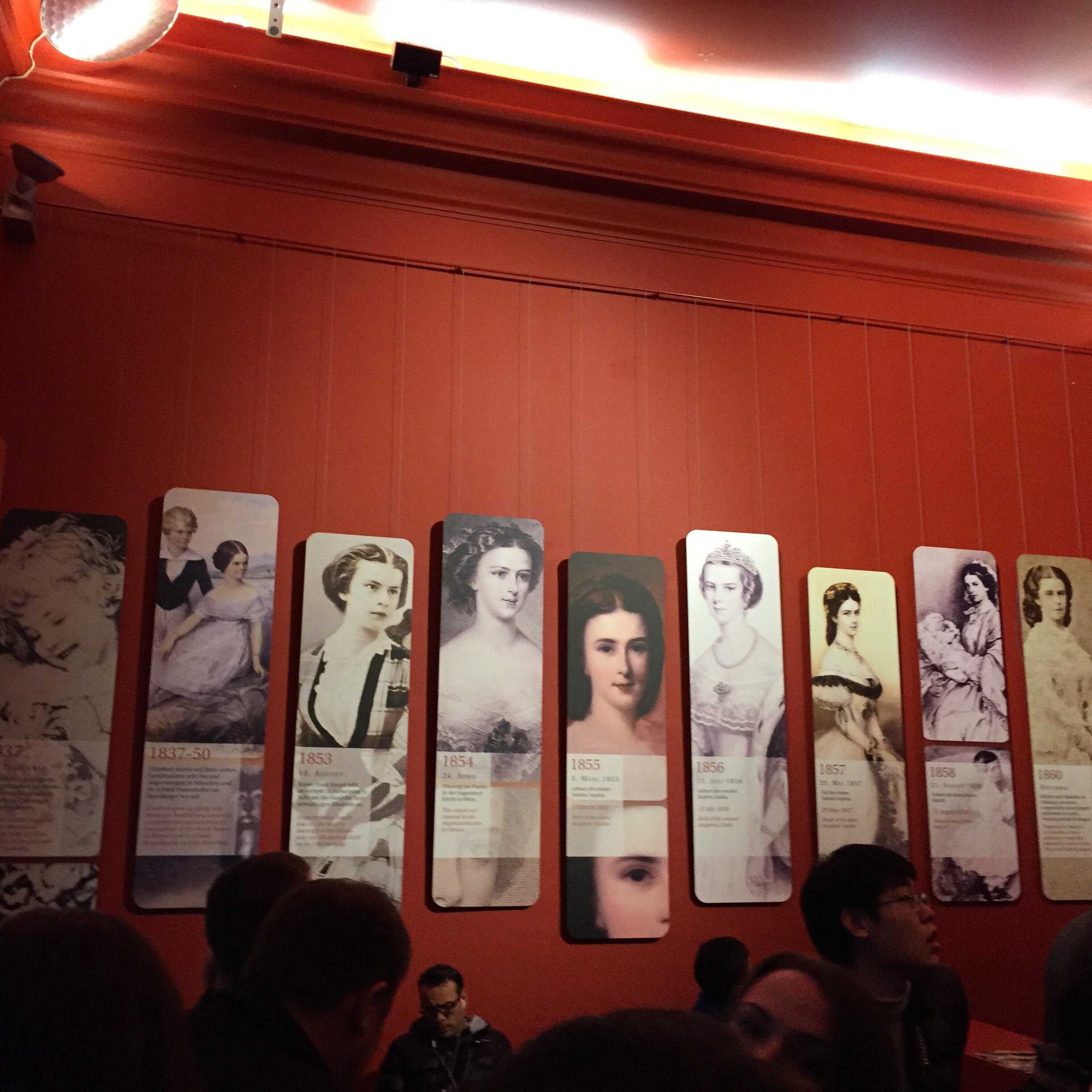 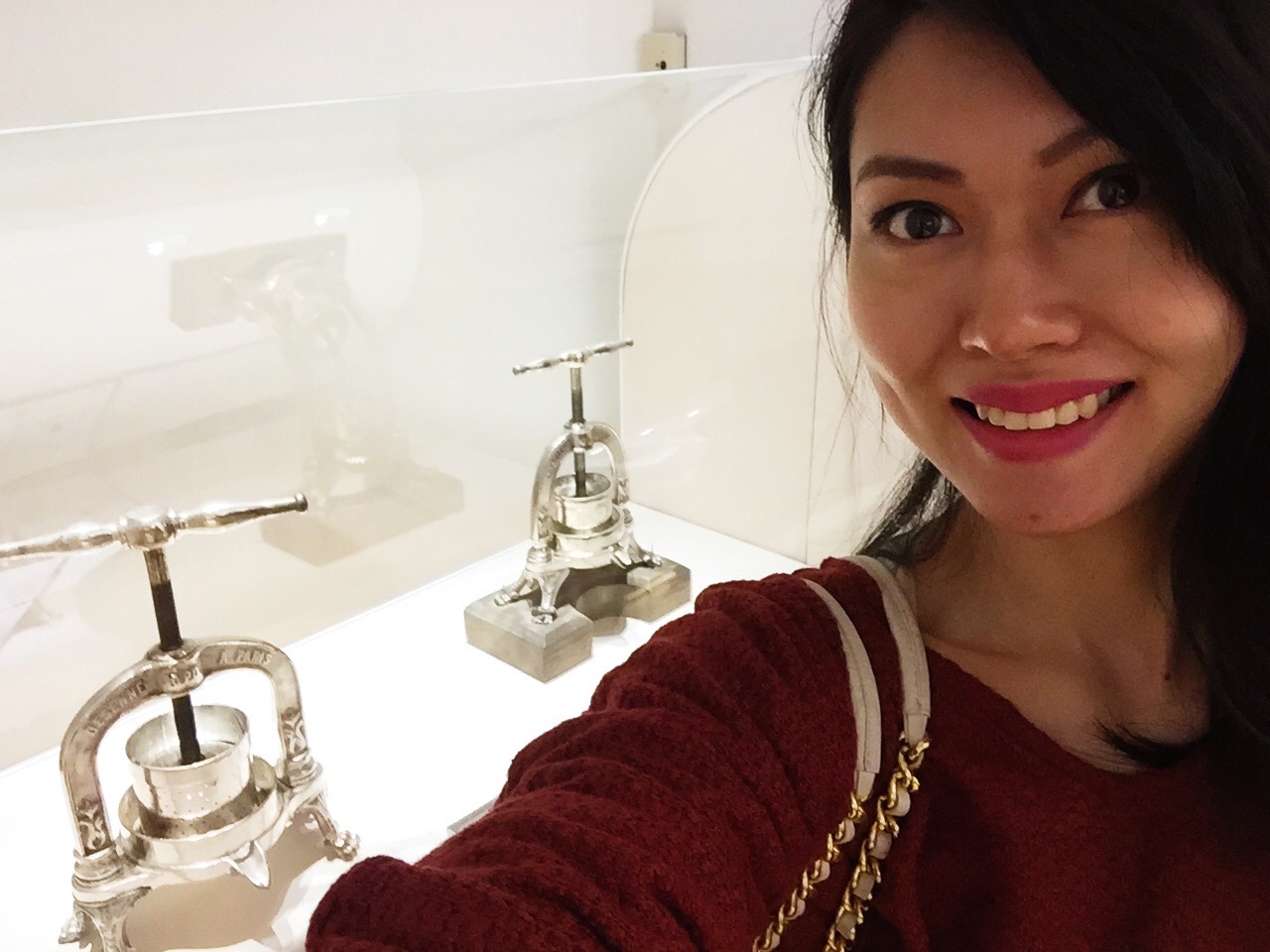 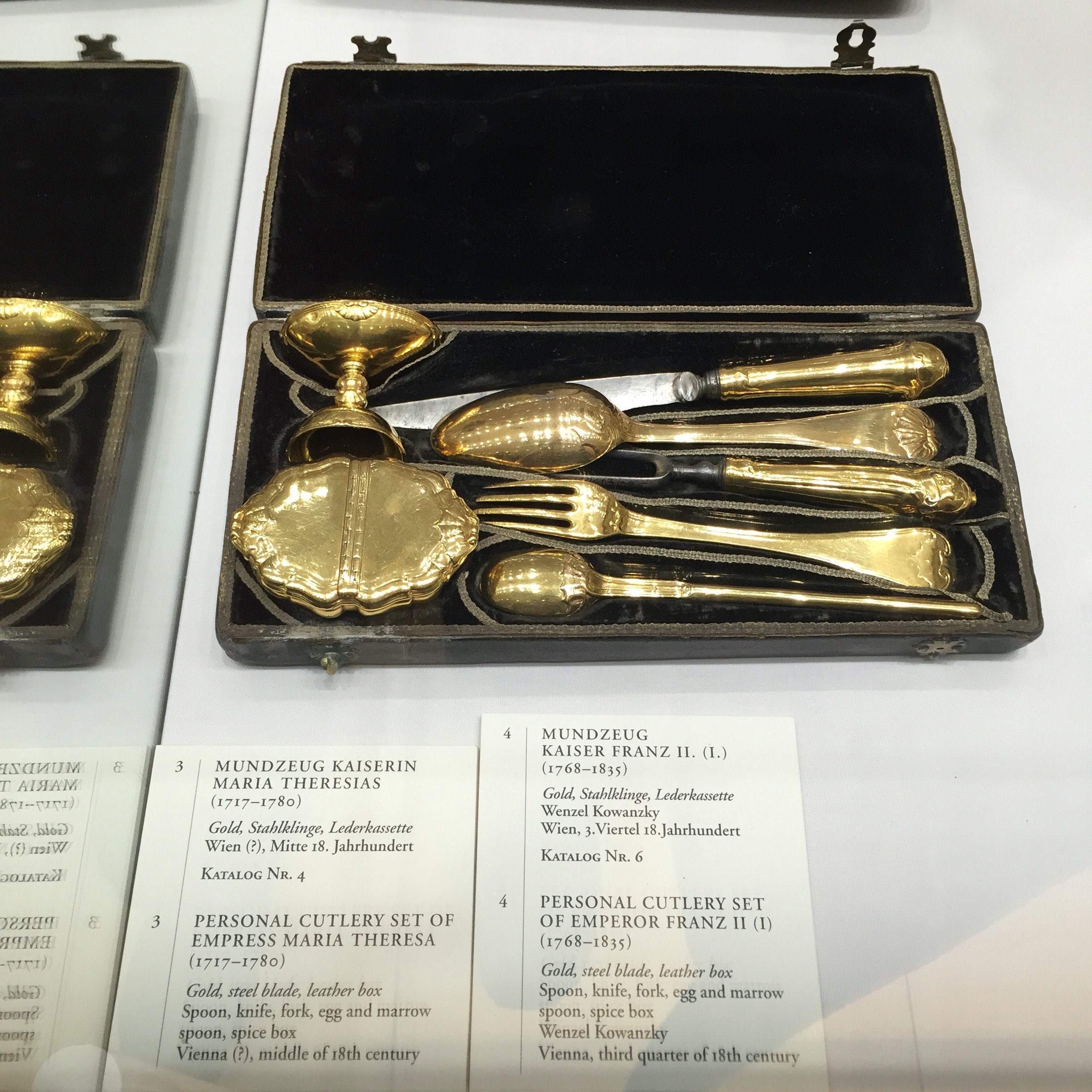 Oh, you’ll be led to a coat room and will be required to tip. Best time to go is in the morning to avoid queues.

What I think? Overrated. Probably I’m not a fan of rich chocolate cake, and it was too early for pastries. 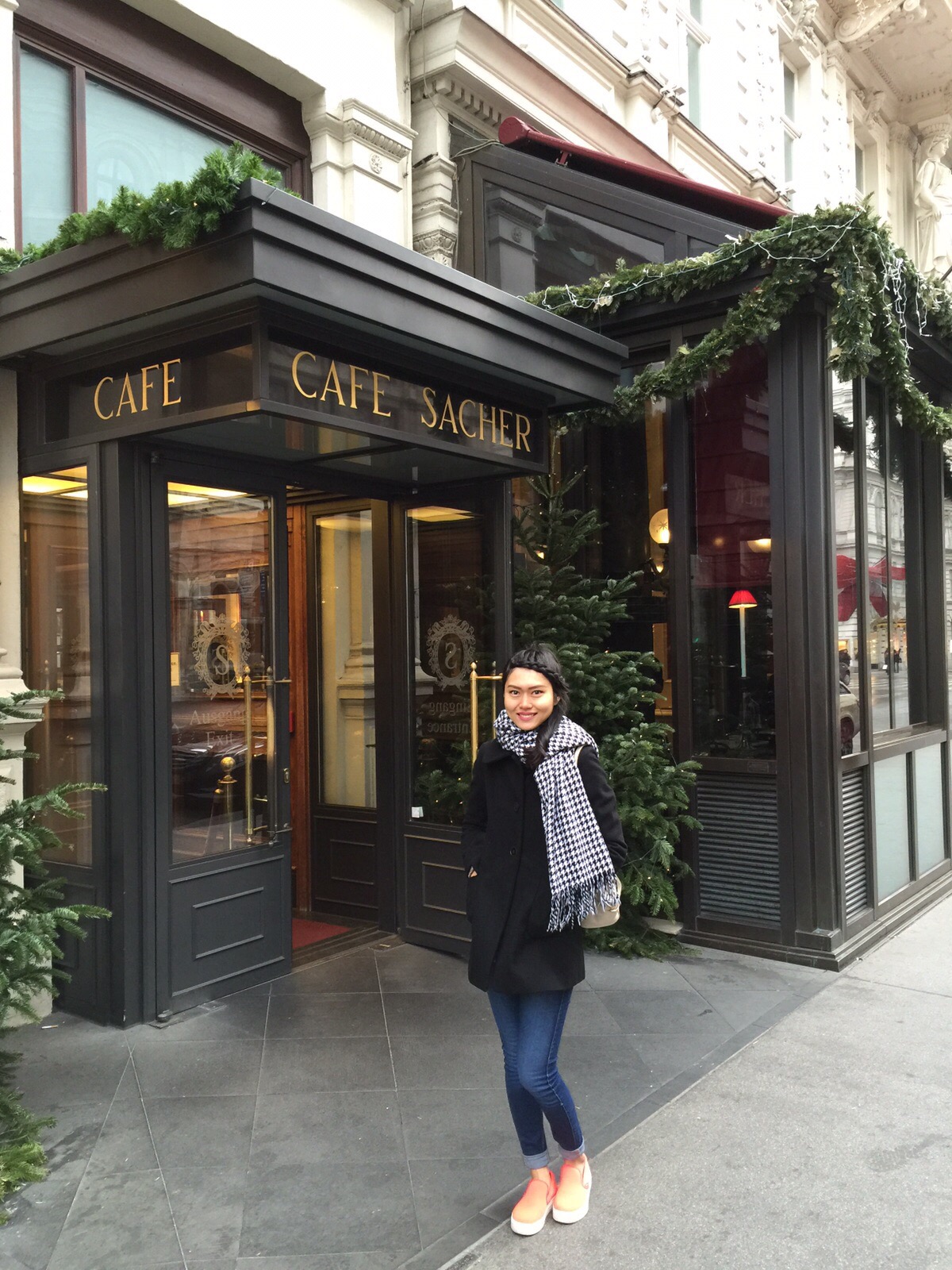 4. Visit Schoebrunn Palace
Ah, an opulent palace much like The Versailles in France. It’s a huge piece of land and on it a palace, garden with maze, hunting ground and even a zoo.

Imagine having animals like deer, fowls and turkey right out of your garden; during temperate weather you shoot some animals and have them for dinner. If you’re feeling kind, you walk a little further to visit caged exotic pets in your own zoo.

The palace has numerous rooms furnished with the most exquisite things of their times e.g marble bath tub and rosewood wall. I particularly like a clock which two sides; the back of tells the time through the reflection – like mirror writing. 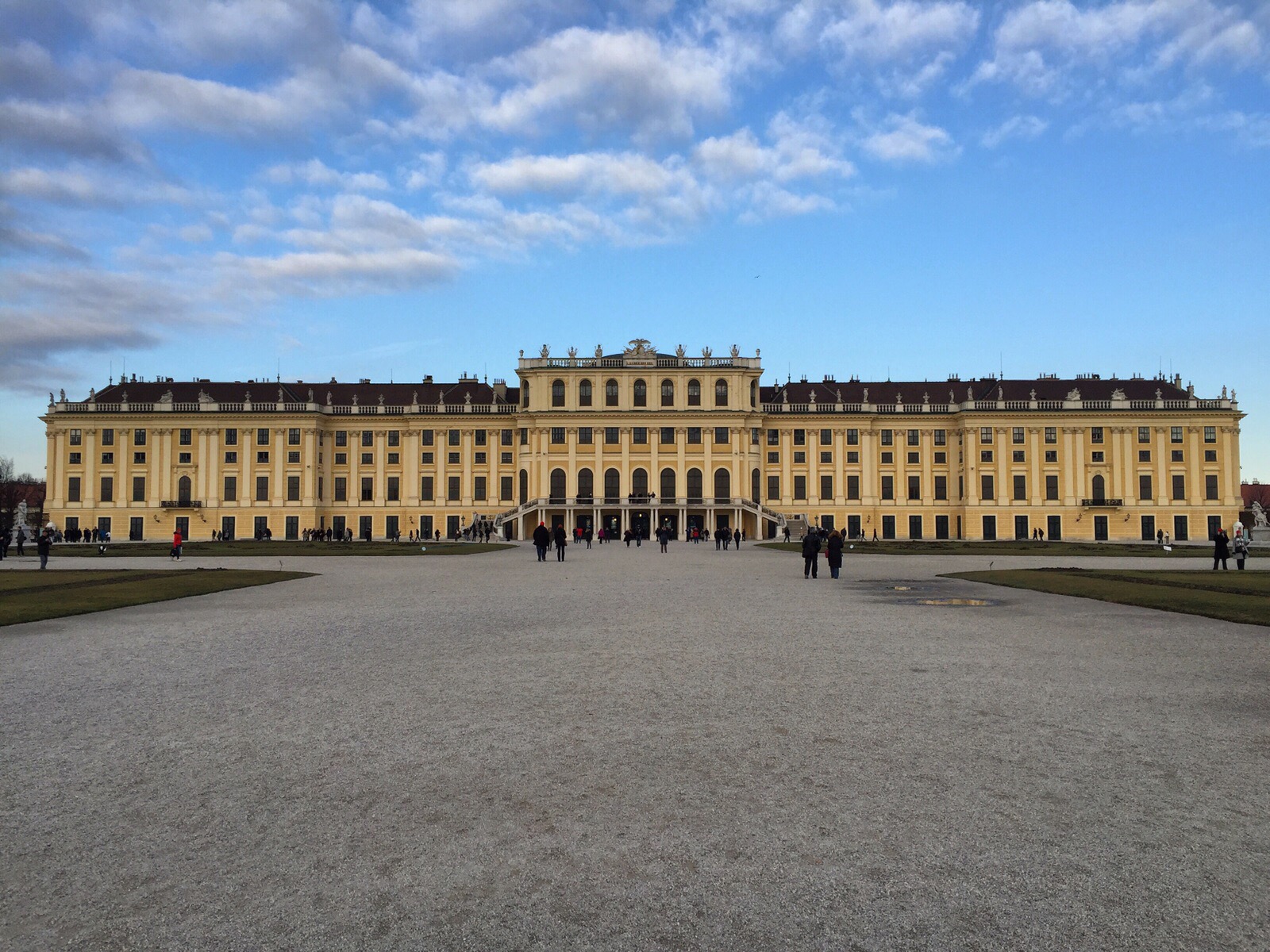 How luxurious life was! (Though the life of Empress Sisi proved that money and power cannot buy happiness)

Unfortunately, no photos were allow inside. I have to be content with this site to jolt my memory of the beautiful furnishing.

5. Visit Albertina Museum
There were some Picasso’s, Matisse and Monet. I like Picasso’s and Matisse’s ingenuity, and Monet always reminds of Van Gogh whom I admire.

The focus though was on Edward Munch whom I am not a huge fan of. Dark art is fine e.g Goya, somehow Edward Munch’s art is too sentimental and depressing. His quotes which were plastered all over the wall didn’t sit well with me. Maybe I should read a little bit more to enjoy this next time. 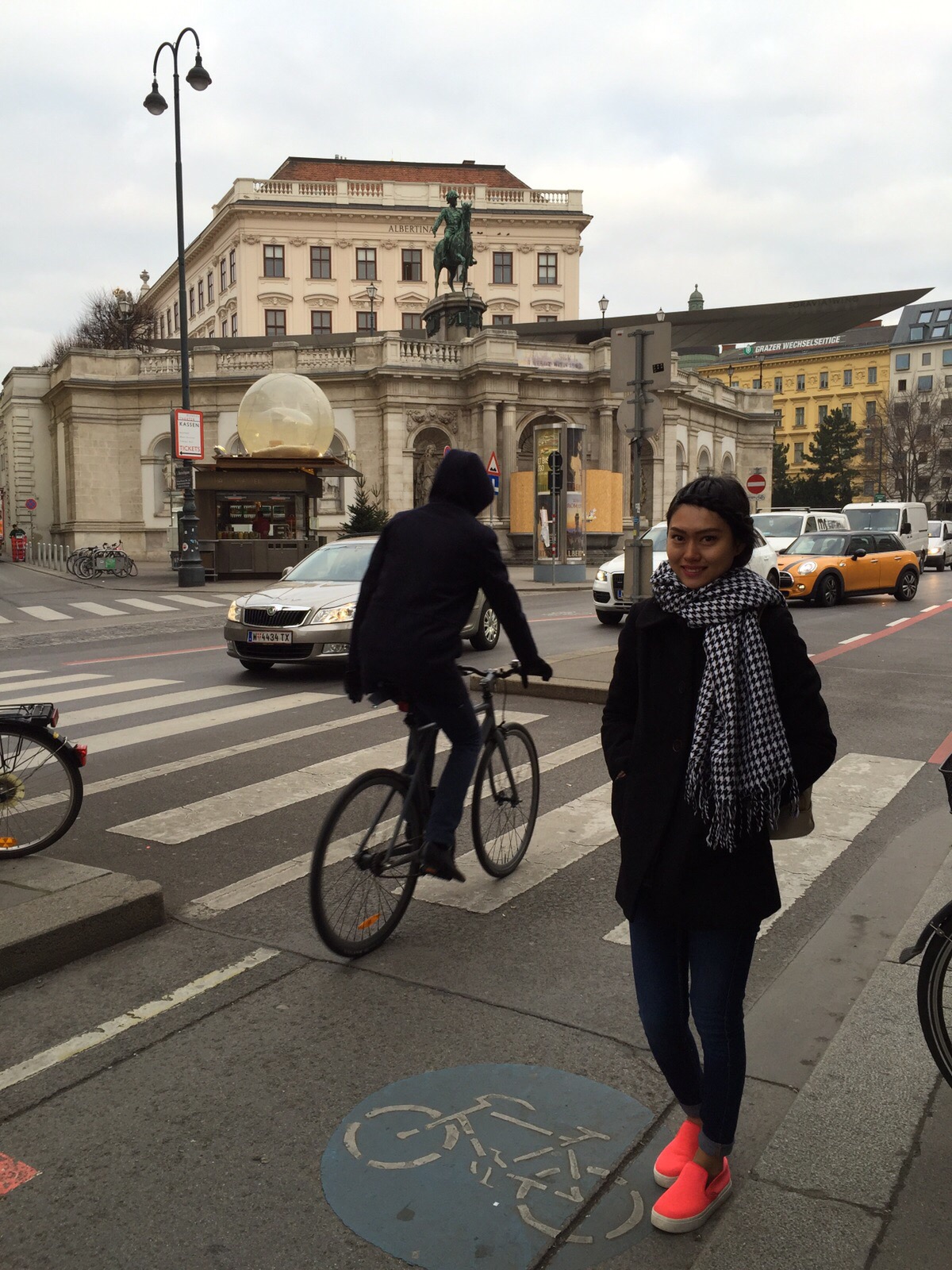 6. Beer, beef and ribs at brewery
Oh, the food here is a lot of pork, veal, beef, beer and potatoes. You can hardly find any greens except small portion of coleslaw. But I enjoyed them all. We normally have late lunch/ early dinner at breweries. Common dishes includes pork ribs, schnitzel and hot soup.

Those I’ve been by order of preference:

They are all around the old town, with the exception of Salm which is nearer to the main palace.

7. Go on top of St.Steven’s Cathedral and enjoy the view of Vienna
Another beautifully decorated church. I like the cross that’s suspended in the air and the little lift that carry us up to about 7 floors. One could save 2 euro and walked 300 over steps up to enjoy the view. I had the priviledge to feast my eyes on Salzburg, making the otherwise beautiful sight incomparable to snow capped mountains, streams and tiny houses in the charming old town.

8. EAT! Have hot food – soup in bread and mulled wine – at Christmas Market
It was sub zero degree at the last Christmas market right in front of Schoebrunn Palace! It was so cold I couldn’t feel my nose or toes! So I warmed up with some hot soup served in a bowl made of bread (how cute!) and drinking mulled wine.

Vienne food is the only cuisine named after a city (instead of a country), so it deserved another post on its own on another day… 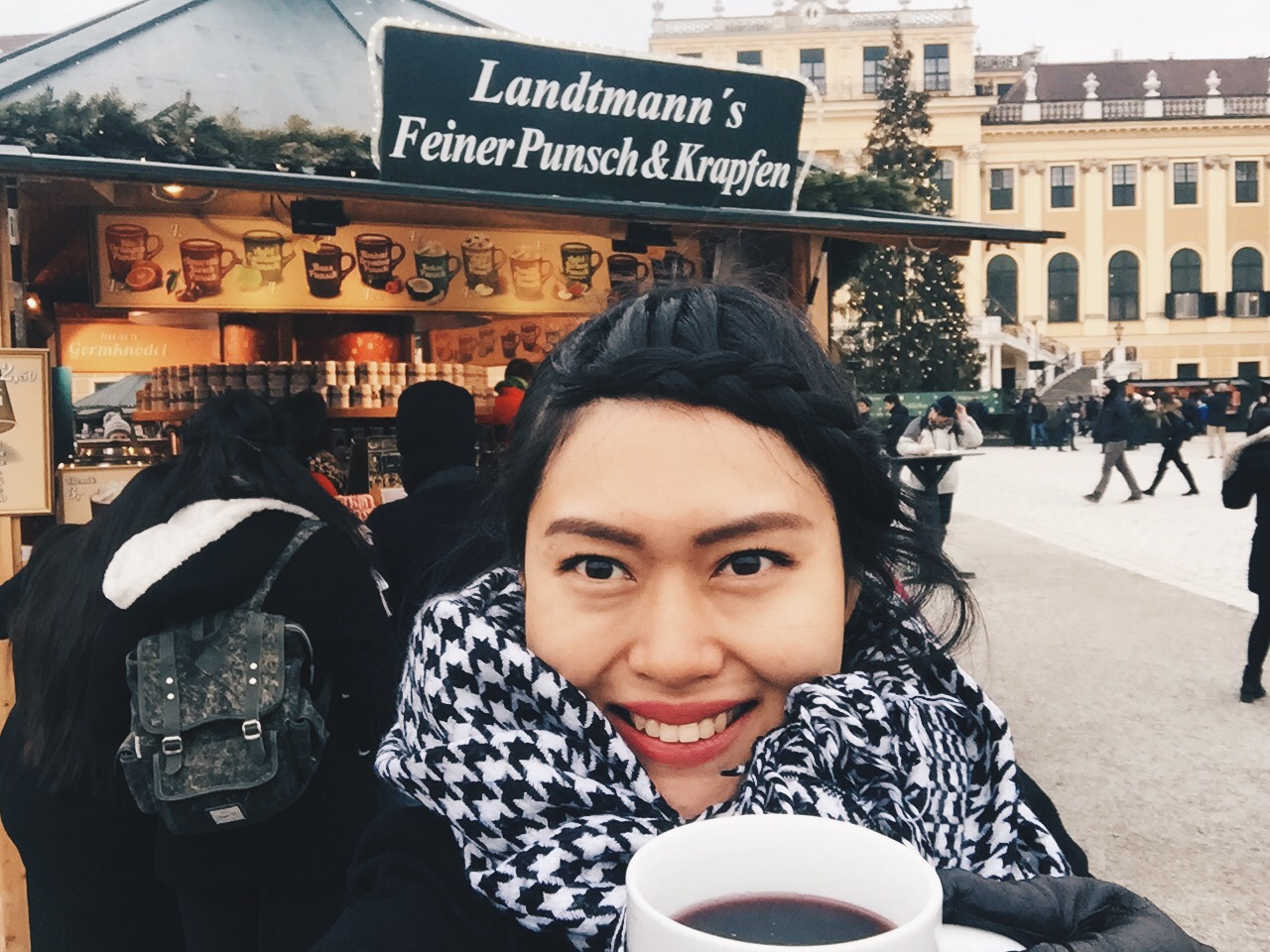 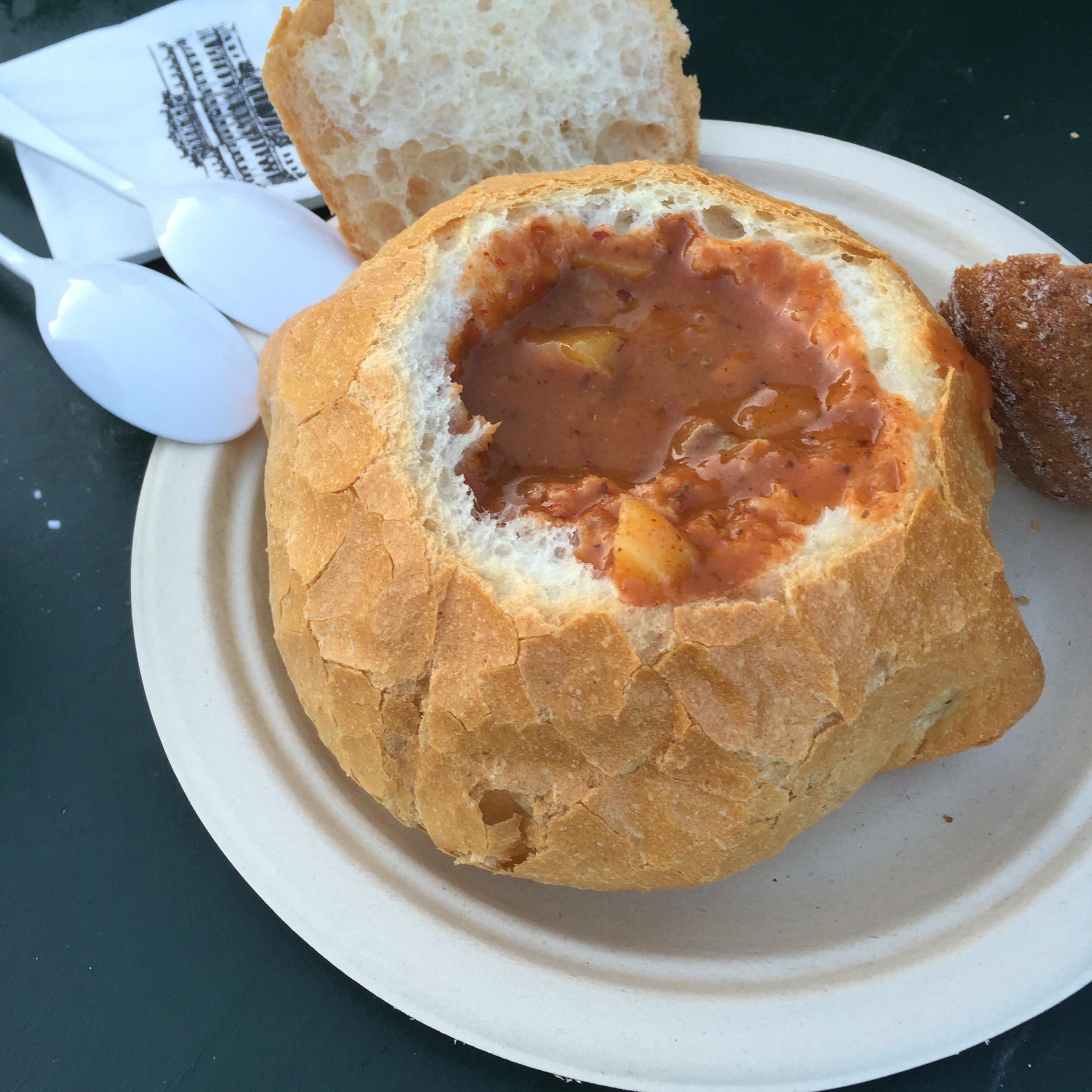 9. See dinosaur and things from space at the Natural History Museum
I did not expect much from this museum but I was pleasantly surprised by things I never thought will be displayed. There were thousands of different stones and gems collected from all over the world, heaps of dinosaur bones (some that can be touched), a rock collected from the moon and meteoroids from space that made its way to the earth.

The claim to fame is a small sculpture, the Venus of Willendoft, depicting a woman with huge belly and breast, made 25 000 years ago. It’s wayyy before Christ. I was so fascinated!

(Though it probably cannot match the British Natural History Museum which is more informative and free,to boot 10. Follow the new year trail
At New Year Eve, roads are closed for celebration. There were stages and stalls selling hats, hotdogs and mulled wine in pink piggy mugs. We walked around much earlier to avoid the crowd, and gathered food from markets for our NYE feast in the hotel instead. Oh, it was the best decision ever. We spend a warm new year indoors and enjoyed the fireworks from the window.